Fastest of the month
Zevans


Together with his brother, Napoleon Bonaparte made Brussels unsafe in 1806. He ruled absolutely and determined (almost) everything. Yet there was one thing over which he had no influence, and that was the ugly but popular Manneken Pis. He wanted to get rid of it, but that would not go down well. With the Escape Tour Brussels, you will take on the role of Napoleon, and you will look for the secret passage out of Brussels. But why?

The Manneken Pis was a thorn in his eye. Despite the fact that the father of his mistress was the designer of the statue, Napoleon decided to secretly make the statue disappear. The designer was furious and planned an attack on Napoleon. Fortunately, Napoleon survived the attack, but his life is no longer safe... With the Escape Tour, you have to find the secret passage out of Brussels within two hours, just like Napoleon. Will you set a record time?

You can find the secret passage if you have completed all assignments, answered questions correctly and managed to decipher the cryptic clues. And in the meantime, you will come across the nicest places in Brussels! The escape attempt begins on Paleizenplein. Good luck! 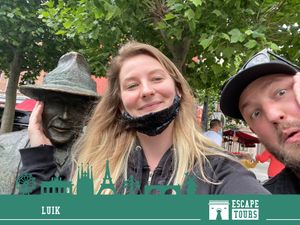