In 1975, student Johann Georg Lahner was very excited to begin his internship with the best butcher in Frankfurt. After tasting Frankfurt's finest sausage for the first time, a new world opens up for him. The ingredients were a well-kept family secret, but he was determined to do everything he could to learn the secret!

After several attempts to steal the recipe, he devised another trick, which was not at all proper… After long hesitation, he put his plan into action. And yes, he finally succeeded! However, the butcher soon found out and was, of course, furious. Johann quickly fled, fortunately with the list of ingredients. He went looking for the city's other secret: a secret passage out. With the Escape Tour Frankfurt, you follow in the footsteps of the intern, looking for that secret passage.

The butcher was widely known in the city and had thus drummed up many friends and family. Johann only had two hours to escape. Will you be able to answer all the questions correctly in time, solve the riddles and decipher the clues in this citygame? Then you will find the secret passage and earn a place on the Wall of Fame. And while you wander through the city, you will also come across the most beautiful places in the city! The search begins on the Operaplatz. Good luck! 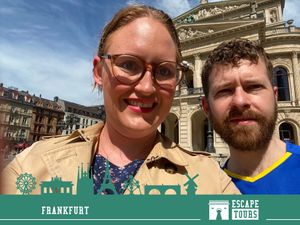